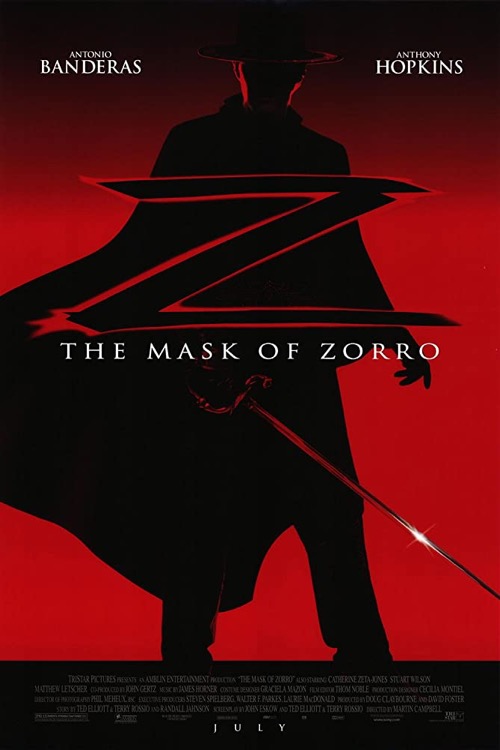 In 1821 Old California–after humiliating once more the evil Spanish governor, Don Rafael Montero–the mysterious black-caped masked avenger of the oppressed, Don Diego de la Vega, or Zorro, finds himself incarcerated. With his only daughter raised by Don Rafael as his own, the grizzled swordsman makes a daring escape nearly two decades later, and takes under his wing the unrefined outlaw, Alejandro Murietta, to teach him the ropes and, hopefully, become the next Zorro. Now, the stage seems set for a ferocious final confrontation, as the new young rapier-wielder prepares to thwart the despicable governor’s sinister plans. Can Alejandro live up to legendary Zorro’s name?

I remember of all the summer movies of 1998 (Armageddon, Deep Impact, Lethal Weapon IV etc.), I enjoyed this one the most. Sure a few liberties with plausibility might have been taken but the overall experience was very enjoyable. There was a sense of pioneering, honor, romance, and loyalty about the characters that made the viewing experience all the more immersive. Director Martin Campbell (Goldeneye, Vertical Limit) staged some exciting action sequences and was lucky to have a talented cast to make considerably more out of what could have been stock characters. Oh, and Banderas (in his best Hollywood role) and Zeta-Jones have great chemistry, a fact that is especially notable in their memorable dance together. All in all, very good escapist entertainment, 9/10.